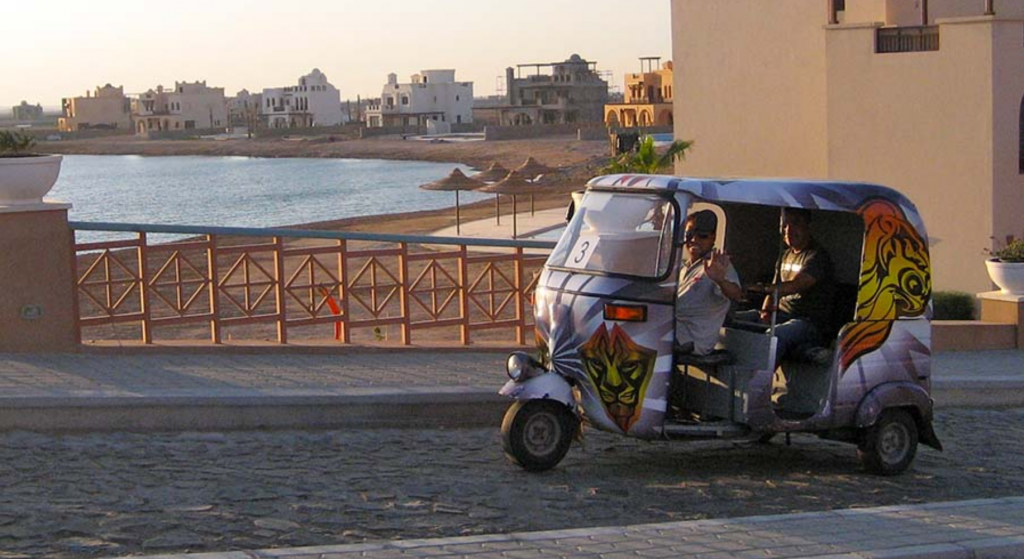 The use of rickshaw intensively in Asian countries only recently However, it has spread remarkably and has become one of the most common means of transport in Sudan

However, despite its effective role in pushing the production wheel as an effective means, it is considered one of the largest polluting means of transport, as it works on the incomplete burning of gasoline blended with lubricating oils and result in the release of toxic gases that threaten human health and environmental protection.

Moreover, it is an environmental threat, but it has recently been attributed to the increasing use only has become a competition for the already scarce of fuel and lubricants. The effect of this on the consumption of lubricants reached a range where increased consumption of lubricants as fuel has doubled their prices much more than the Public vehicles drivers can handle which forced many of them out of service and may be one of the causes of the current transport crisis experienced by the Sudanese.

In contrast, the public vehicles leaving the scene offsets an increase in the use of rickshaws.

It is also noted that the operational life of the machines rake is very limited so that it does not exceed a few months and require rickshaw replacement parts of the engine.

This repeated consumption of aspirates is offset by a high import rate and competition for foreign currency resources.

- Compete heavily on fuel consumption (rows of pumps) and lubricants.

- The rickshaws are characterized by increased consumption of spare parts.

- Note the increased occupancy of roads and crossings, where the numbers are large and low yield (3 passengers).

- As a result of the poor security systems invested in Rakshaws has caused a lot of fatal accidents.

We have all the above to develop a project to develop an economic, efficient and environmentally friendly means of transport and achieve the proper exploitation and sustainability of resources.

The goal of the project:
Development and localization of an economical, efficient and environmentally friendly means of transport.(Developing a solar powered electric rickshaw)

The project:
Localization of the main components of the rickshaw

Giad can be used to manufacture cars and heavy machinery in the manufacture of chassis, seats and accessories, preferably to invest in the production of systems that increase the safety of the rickshaw.
A specially efficient motor must be chosen in addition to being attached to a dynamo that produces electricity using the same rickshaw movement.

2 / production of batteries with storage capacities and excellent quality can be coordinated with the private sector in this area, where there are local factories to produce batteries for cars.

3 / The use of solar cells with good yield and can be ordered to manufacture solar cells locally through the plant cells of the Solar Energy Research Center in Soba.

4 / Production of electronic circuits that control the operation of electric rickshaw in cooperation with one of the competent national centers.

Positive impact of the project:

First: In the field of environmental conservation

- The exclusion of auditory pollution caused by rakshaws.

- Reduce rival rickshaws on the vital resources of the state.

- Reducing the price of rickshaw and thus increasing the chances of poor families owning a vital means of production.

- Decrease in the operational costs of Raksah leads to lower prices of services provided and makes them more accessible to the public.

- The exclusion of negative impacts on the environment and society promote the health of the community.

- Reduce fuel consumption and lubricants and reduce the import of rubbers.

The localization of the Rakshaws industry strengthens the national economy.

Establishment of a pilot project:

The project can be implemented through a prototype applied in the sanitation sector so that the rakshaws serve the sector of hygiene and sanitation.

- Sunshine and high temperatures most days of the year.

Project Threats:
- Weak management culture
- Lack of adequate funding for all phases of the project
- Migration of qualified cadres and failure to maintain them
- Policy instability

Sudanese cadres initiative in the management of social projects