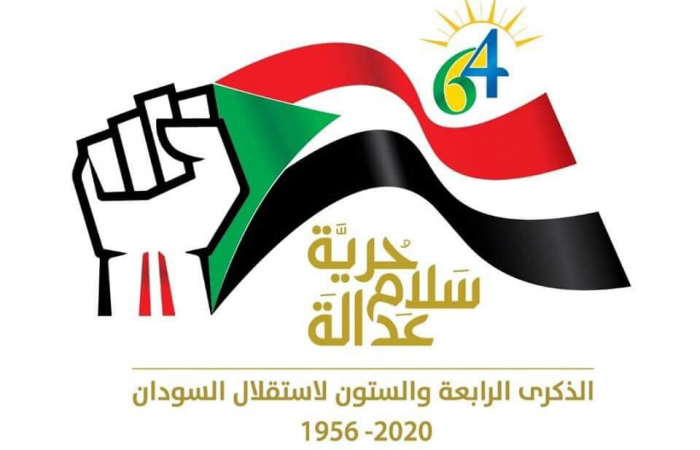 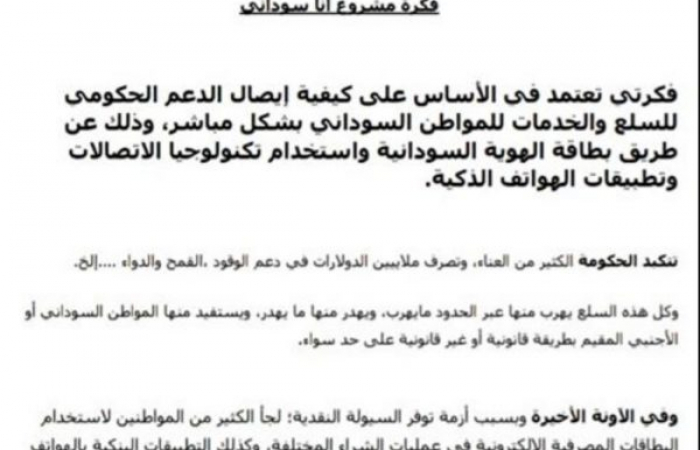 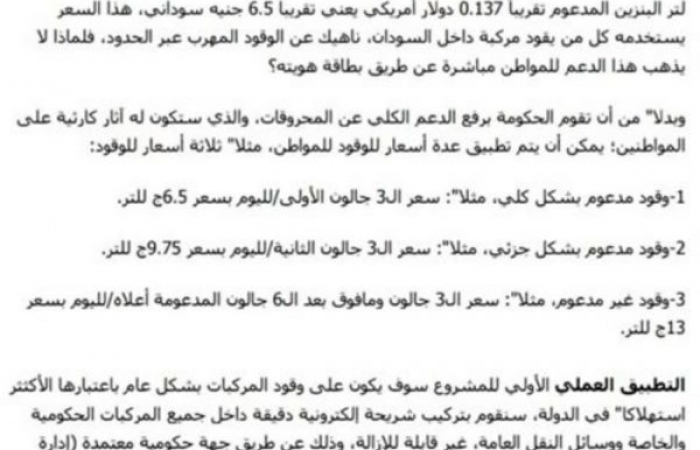 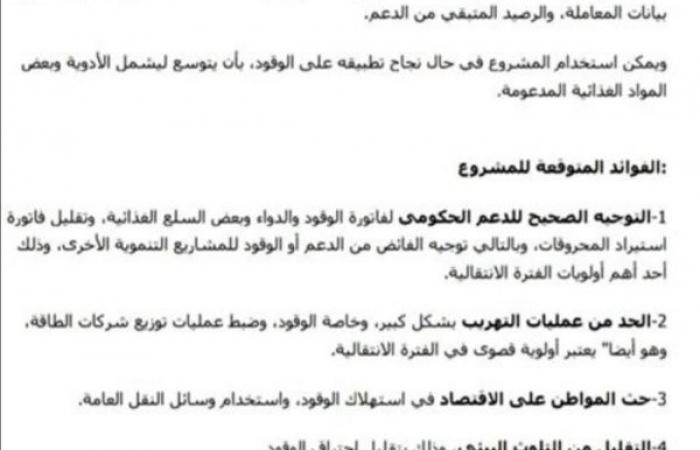 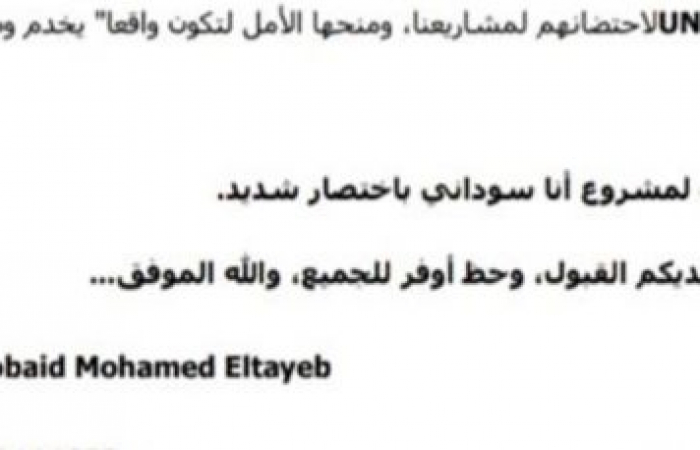 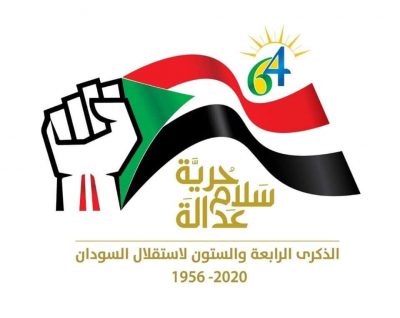 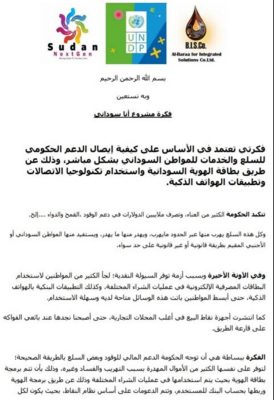 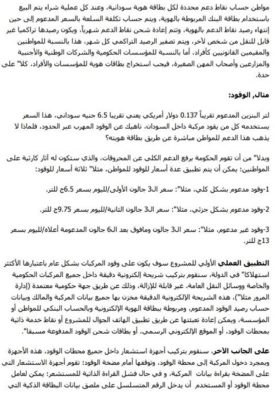 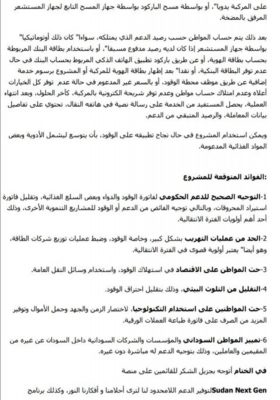 In the name of Allah the Merciful

Idea project, I am Sudanese

My idea mainly relies on how to directly deliver government support for goods and services to the Sudanese citizen by the Sudanese identity card and the use of telecommunications technology and smartphone applications.

The government is taking a lot of trouble, spending millions of dollars in fuel, wheat, medicine, etc.

All these goods are smuggled out across the border, and some get wasted, and the Sudanese citizen or foreigner residing in a legal or illegal way alike can benefit from it.

Recently, due to a crisis in the availability of cash liquidity, many citizens resorted to the use of electronic bank cards in various purchases, as well as banking applications on smartphones, even the simplest citizens have these methods available to him and easy to use.

Point of sale devices spread in most shops, and we even find them at fruit sellers on the road.

The idea is simply that the government direct financial support for fuel and some commodities in the correct manner.

To save a lot of money wasted due to smuggling, corruption, and others, by having the ID card programmed so that it can be used in various purchases through programming the identity and linking it to the user’s bank account

And the subsidies are made on the basis of the points system so that each citizen has a specific support points for each Sudanese ID card, and at each purchase, the sale is made using the bank card associated with the identity, and the cost of the commodity is calculated at the price that is supported monthly, and its balance is cumulative other than the ending of the balance of the support points with the identity The support points are recharged, transferable from one person to another, and the cumulative balance is zeroed every month, this is for citizens and legal residents as individuals, as for government institutions, national and foreign companies, farmers and small-scale professionals, ID cards for institutions all separately.

Approximately US $ 137.0, which means approximately 5.6 Sudanese pounds, which is a liter of subsidized gasoline

Anyone who drives a vehicle inside Sudan uses it, let alone fuel smuggled across the border, so why not direct this support to go to the citizen directly through his identity card?

And instead of "that the government lifts the total fuel subsidy, which will have disastrous effects on citizens; multiple fuel prices can be applied to a citizen, for example, "three fuel prices:

1- Fully subsidized fuel, for example, the price of the first 3 gallons/day at the price of 5.6 pounds per liter.

2- Partially subsidized fuel, for example ": the price of 3 gallons per second/day at 75.9 pounds per liter.

3- Unsupported fuel, for example ": the price of 3 gallons and above after the 6 gallons supported above / day at 13 g per liter.

The initial practical application of the project will be on vehicle fuel in general as the most consumption "In the country, we will install a microchip inside all government vehicles, private and public transport, not removable, by an accredited government agency - department of Traffic example, this microchip contains all vehicle and owner data and data the subsidized fuel balance account, linked to the e-ID card, and to the citizen's bank account or the institution can be repackaged by the project mobile phone or self-service points at gas stations, the official website, or prepaid fuel recharge cards.

On the other hand, we will be installing sensors inside all the gas stations, these devices once the vehicle enters the gas station and stops it in front of the fuel pump, the sensors will sensors on the pump by reading the vehicle data, and in case the sensor self-reading fails, the fuel station operator or the user can enter the serial number on the smart card data label on the vehicle manually, or by scanning the barcode by the sensor device's scanner attached to the pump.

After that, the citizen is calculated according to the balance of support he has, whether it is "automatic" by sensor if he has prepaid balance ", or by using the bank card attached with the ID card account, or via the smartphone application barcode linked to the bank account in case the bank card or cash is not available after showing the vehicle or project ID card with service fees additional by fuel station employee, or at an unsupported price if all options are not available above and not having a citizen account and the lack of an electronic chip in the vehicle, as the last solution, and after expiration the process, the recipient of the service gets a text message on his mobile phone, containing details transaction data, and the balance of the support.

If successful in fuel application, the project can be used to expand to include medicines and some subsidized food.
Expected benefits of the project:
1- Correct orientation of government support for the fuel and drug bill and some food commodities, and reducing the fuel import bill, thus directing surplus support or fuel to other development projects, which is one of the most important priorities of the transition period.
2- Significantly reducing smuggling operations, especially fuel, and controlling the distribution of energy companies, which is also "a top priority in the transitional period.
3- Urging the citizen to save fuel and use public transportation.
4- Reducing environmental pollution by reducing fuel combustion.

5- Urging citizens to use technology, shortening time and effort, carrying money and saving more exchange on the bill for printing paper currency.
6- Distinguishing the Sudanese citizen and Sudanese institutions and companies inside Sudan from other residents and workers, by directing support to him directly and not others.
In conclusion, I extend my sincere thanks to those in charge of the platform Sudan NextGen for providing unlimited support for us to see our dreams and ideas come true, as well as the UNDP Accelerator program, embracing our projects and giving them hope to be a reality "serving our dear country.