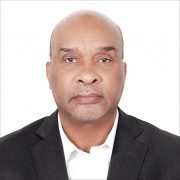 Dr. Mohamed A. SayedProfessor of PsychologyDr. Mohamed Sayed is a graduate of Howard University in Washington DC with a PhD in Psychology (1993). He further completed a Post-doctoral fellowship and training at The Karl Menninger School of Psychiatry and Mental Health Sciences, Topeka Kansas, USA. He served in the Faculty of Karl Menninger School of Psychiatry (1996-2000) teaching Psychiatry in Cross-Cultural settings. During the same period he obtained a Respecialization Certificate in Clinical Psychology from Forest Institute of Professional Psychology in Springfield, Missouri, USA. Dr. Sayed has a Masters of Arts in Psychology from Ball State University as well as Masters of Science degree in Information and Communication Science from Ball State. He is the author of numerous Scientific-Peer-reviewed articles in international Journals and Books (Psychopathology in Arabic) and is contributor to the widely acclaimed book: Cross-Cultural Counseling around the World (SAGE Publication, 2009). He has worked in multiple clinical as well as academic settings around the world including SKMC , as an Associate Professor of Psychology at the Department of Psychiatry , Faculty of Medicine, Psychology Department, UAEU; Professor Madia at the Institute of Medicine University of Brunei Dar As Salam. He worked as a consultant at the Neuroscience Center at King’s Fahad Medical City (KFMC) in KSA.He serves in the Review board of American Journal of Health Behavior, and recently is appointed as founding and associate editor of the Journal of Health Behavior and Policy Review (the Review), He currently serve in the board of the American Journal of Health Behavior as Middle Eastern Editor. IJMHHR. At present, Dr Sayed is Department Head of the Clinical Psychology Program at the National Rehabilitation Center in Abu Dhabi, UAE. Dr. Mohamed is a member of the American Psychological Association (APA), the British Psychological Society (BPS), American Psychological Science (APS), and American Academy of Health Behavior (AAHB).