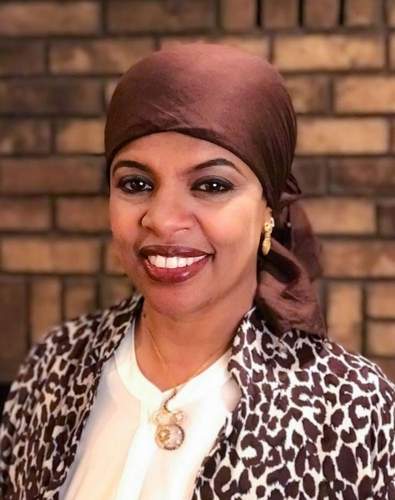 Mazahir Salih came to the United States 20 years ago with a degree in civil engineering from Sudan University of Science and Technology. She first settled in Virginia, While in Virginia she became a citizen, got married, and started a family. She moved to Iowa City in 2011 to pursue a degree in electroneurodiagnostic Technology.
She also became very involved as a community activist, helping to found the Center for Worker Justice, where she is currently a full-time community organizer. Working at CWJ to defend the rights of workers, Salih was able to work on behalf of labor and social justice issues.

Salih serves the community in many other ways, including being on a variety of boards and commissions. Some of those include the Iowa Valley Global Food Project, the Community Police Review Board, the Downtown District, Council for the international visitor to Iowa city CIVIC, University of Iowa Human Rights Commission, and the Sudanese-American Women and Children’s group.
Salih elected on Nov/04/17 as the 1st Sudanese American to hold an office in the USA, she became a city council of Iowa City, and she wants to take her experience and knowledge as a community organizer to the council.